Dec 6, 2019
Back
The SEAJETS WorldChampion Jet high speed vessel has been honored as the "Ship of the Year" by the prestigious Lloyd's List Greek Shipping Awards 2019. This award is given for the first time in the history of the event to a high-speed passenger ship, recognizing the unique design, innovation and contribution of the ship in Greek shipping. 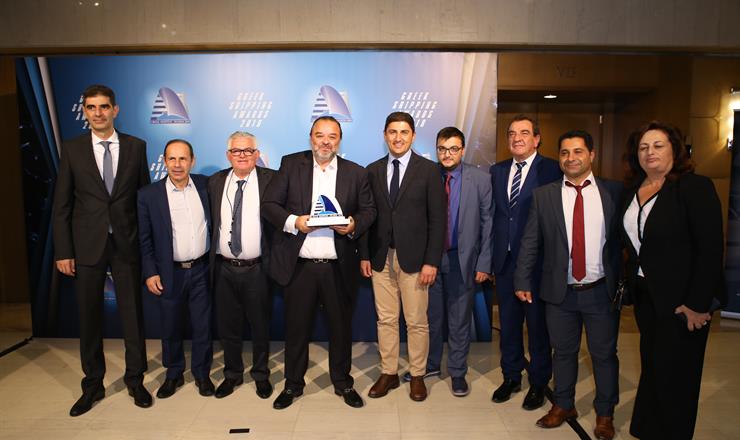 The SEAJETS WorldChampion Jet high speed vessel has been honored as the "Ship of the Year" by the prestigious Lloyd's List Greek Shipping Awards 2019.
This award is given for the first time in the history of the event to a high-speed passenger ship, recognizing the unique design, innovation and contribution of the ship in Greek shipping.
The internationally recognized and prestigious "Lloyd's List Greek Shipping Awards" are organized by Lloyd's List, a shipping newspaper founded in 1734. The awards are evaluated by an independent team of 10 reviewers from many different shipping sectors. The awards are attended annually by the leading Greek and international shipping protagonists who compete in 17 different categories (Ship of the Year, Tanker Company of the Year, Shipbroker of the Year, International Personality of the Year κ.α.).
On receiving the award, Mr. Marios Iliopoulos, Head of Strategic Planning and Development of SEAJETS, stated:
"The award is a great recognition and honor for SEAJETS, given that it was the first time a high-speed passenger ship was awarded at the 'Lloyd's List Greek Shipping Awards 2019”, occupying a place next to the most recognized ships.
We are especially happy and proud to have been awarded the WorldChampion Jet as the ship of the year by our Greek shipping family. The Cyclades' Formula 1, as our islanders call it, is a unique high-performance, state-of-the art ship that even holds a place in the Guinness World Records for her speed that can reach up to 50 knots. Her environmentally friendly characteristics are also very important in relation to the pollutants emitted by the 2 airplane type turbines she is equipped with and the little backwash she generates when sailing.
At Seajets, our goals are fully aligned with the goals of all Greeks who want to see Greece, this country with its huge history and culture, smile again and fill the hearts of all Greeks with pride and joy. I have been, I am, and will always be by the side of our Aegean, our Greece that we will never let to be forgotten, always contributing to its deserved prominence. I always try to get young people to set goals, visions, dream their future and fight for their core principles while respecting the people who contribute with their prestige, their credibility and their ideals in helping our shipping industry prosper in future.
We believe that society cannot exist without respecting, living, breathing together. The inhabitants of the Aegean along with Mayor of Rafina, the Cyclades Ambassadors-Mayors from the beautiful Sikinos, Serifos, Naxos, Folegandros, Santorini, Thirasia are all sharing our enthusiasm for this award."

WorldChampion Jet, The Guinness record-breaking High speed vessel traveled daily from Piraeus to Syros, Mykonos, Naxos and Santorini with unique speed, comfort, consistency combined with the groundbreaking concept that includes an authentic Formula 1 race car on board, surely deserved to be named the ship of the year.
The awards were presented on Friday, December 06, 2019, at the Athenaeum InterContinental at a brilliant ceremony in the presence of celebrities and representatives of the Greek and international maritime community. The event was attended by Deputy Minister of Culture and Sports Lefteris Avgenakis and Mayors of Rafina-Pikermi Mr. Evangelos Bournous, of Naxos and Small Cyclades Mr. Dimitris Lianos, of Serifos Mr. Konstantinos Revinthis, of Santorini Mr. Antonis Sigalas, of Sikinos Mr. Vasilis Marakis, of Folegandros Ms. Euthalia Papadopoulos and of Thirassia Mr. Petros Karamolegos.